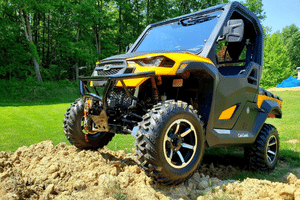 The Cub Scout Challenger 750 is an extremely practical utility vehicle. It offers durability, affordability and comfort. Plus, it handles a variety of jobs including landscaping and agriculture.

That said, we can’t turn a blind eye on Cub Cadet Challenger 750 problems. You’re likely to encounter them along the way. Fortunately, most of them are easy to solve.

While we think you’ll get value for your money with this UTV, prepare to troubleshoot and fix the following problem.

1. Too Hard To Shift

Cub cadet UTV users report experiencing a hard shift even while using their UTVs for light jobs. The Cub Cadet Challenger is not an exception.

We come across customers who are concerned about the shifting. It works fine until around 200 hours, then this issue arises.

Most users say the shifting lever becomes hard to shift, which causes problems while operating the machine. Having too much oil in the primary clutch housing is the biggest culprit for this.

The poor design of the shift system does not help either. For a start, you could ensure you have the correct oil level in your Cub Cadet Challenger 750.

If persistent, try accelerating the Cub Cadet Challenger to the correct RPMs before shifting. Mostly, you’re required to brake while shifting.

If clutch problems caused this, try cleaning the primary clutch before going for a test drive.

If you live in one of the unforgiving cold states, the issue could be the greasing. It’s advisable to stop using grease. Instead, try using Moly Dry Spray.

Of the few Cub Cadet Challenger 750 problems reported by customers, this is the most common.

The lever issue comes up when users are trying to shift into reverse gear. The Cub Cadet either delays the gear engagement or refuses to engage at all.

Replacing the built-in accessories with different parts causes the shifting problems after returning the parts.

When replacing parts on your Cadet Challenger 750, empty all the attachments and clean them before returning them back to the machine. Also, check the gears to ensure there’s no debris or dirt.

Most Cub Cadet Challenger 750 users say they sometimes engage the reverse gear, only for the machine to start grinding while backing up.

Sometimes it’s a clutch problem—where the gear does not engage, but in most cases, it’s a transmission problem.

Transmission problems occur when the Cub Cadet Challenger 750 runs on oxidised hydraulic oil or old oil. A faulty transmission part could also be the reason.

We suggest taking apart the transmission of the Cub Cadet Challenger 750 and cleaning it. Check for and replace any faulty parts.

Next, put new fluid before putting it back. With this, you’ll be guaranteed that the transmission is not faulty.

After that, fix the clutch issue by adjusting it. Ensure all the gears engage properly.

The engine of your Cub Cadet UTV may suddenly turn off. This happens after using the vehicle for some time.

You’ll notice when you turn on the ignition it just cranks away. This happens if the utility vehicle is running on overheated engine oil.

This Cub Cadet Challenger 750 model lacks an oil indicator, which can be blamed for this common problem.

Users don’t know how much oil there is. They end up overusing the oil without refilling or replacing it. This causes engine overheating issues.

A faulty spark plug will cause engine problems to the most powerful engine and your cub is not an exception.

Having old or dirty fuel will also cause the engine to stop suddenly because this fuel does not burn properly to produce enough power.

If engine oil is the issue, we recommend solving it by refilling the oil to normal levels and cleaning the oil filters.

Also, check your air filters and ensure they’re clean and they allow enough air into the engine. Remove any faulty spark plugs and replace them with new working spark plugs.

You might also need to check the quality of the fuel you use. If it’s old or poor quality, use newer fuel. If none of this fixes the issues, contact your dealer to rebuild the engine.

With a two-wheel drive vehicle, you expect the steering to feel light while driving. You hope this is the case for the Cub Cadet 750 until the drive lock sets in motion.

The Cub Challenger 750 has two clutches; primary and secondary clutch. It is the clutch system that connects the engine to the transmission systems.

That means, if any of the clutches fails, you can expect transmission problems. Your Cub Challenger 750 may also experience gear engagement issues because of a loose clutch belt or a worn out belt.

Another reason is: the clutch may have come loose due to wear. Most people are not aware, but you can adjust your Cub Cadet Challenger 750’s clutch to make it work better.

You should also tighten a loose clutch belt and replace a worn out belt. If all the above does not work, try replacing the clutches.

The broken muffler is not a common problem among the Cub Cadet UTV users. If your machine has a broken muffler, you’ll experience loud rumbling sounds from the machine.

A crack or a hole in the exhaust pipe or muffler will also result in Cub Cadet Challenger 750 problems. Your vehicle will make more noise when you press down on the accelerator pedal.

As a precaution, if you have a broken muffler problem, stop the vehicle because it can cause a serious accident.

You should take it to a professional mechanic right away to fix the problem or use the manual.

However, we’re sold on its sturdy body and how its cosy seat makes the ride comfortable. Its power steering also allows for comfortable navigation.

There are some problematic features that most users complain about but most of them are either easy to deal with or fix. We recommend this UTV to anyone looking to handle light terrains.

Where is the Cub Cadet challenger made?

A company whose brand new machine they launched was Cub Cadet. It has been building machines for many years in the United States.

Does the Cub Cadet Challenger 750 have power steering?

These vehicles also feature a padded hydraulic cylinder and a hydraulic steering system with a 360 degree angle control and a 360 degree tilting steering column. It comes with a power steering mode for MX750 EPS. Cub Cadet is the biggest name in power equipment and also serious about UTVs.

Some customers report common problems relating to shift levers, steering or transmission, but these are repairable problems.

We’ve explored and explained the most common issues with Cadet 750 and shared useful tips to help you troubleshoot and fix them. All the best getting the most out of this UTV!