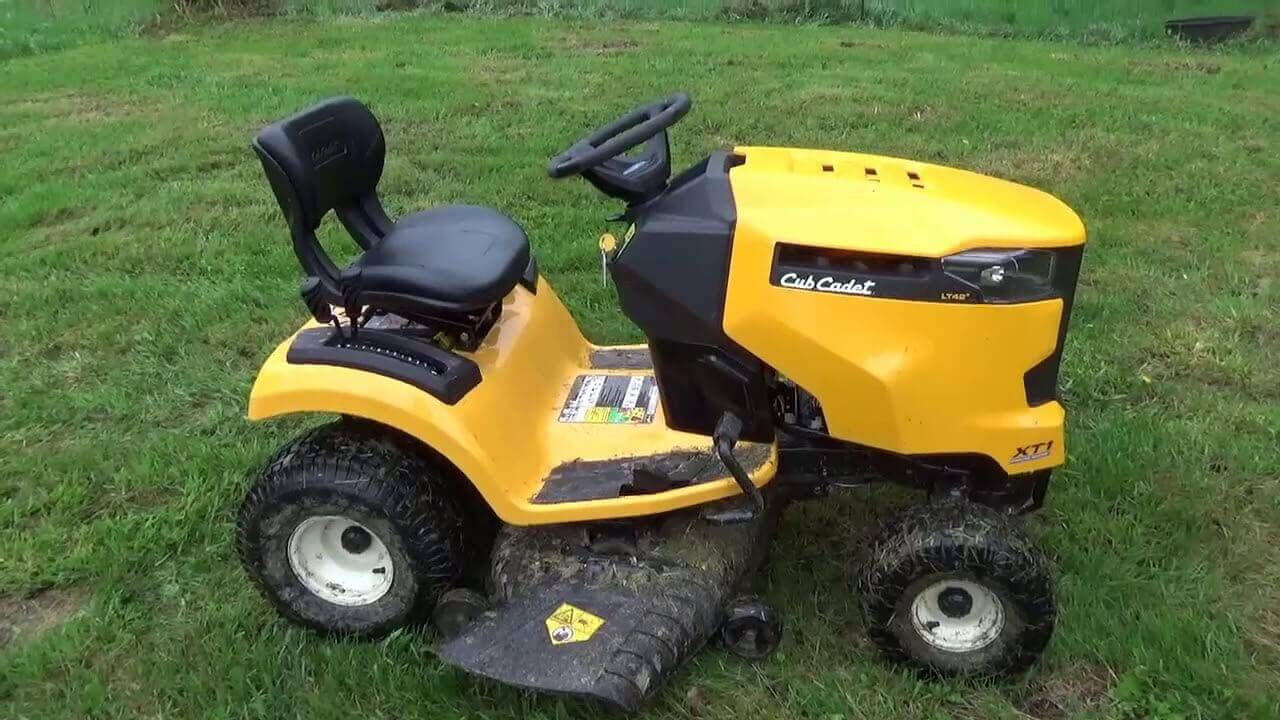 Cub Cadet makes some of the best lawn tractors with practical attachments for maximum convenience and productivity.

The Kohler engine-powered lawn mowers are specially designed to mow grass with ease in dry and wet weather.

Moreover, the steering wheel system is optimized for responsive handling and offers a 16-inch turning radius.

Buyers get a 3-year no-hour-limit comprehensive warranty that covers the whole tractor, including the powertrain. Additionally, you get a 5-year chassis and front-axle warranty.

Cub Cadet XT1 tractors can fail to start for several reasons. Perhaps the engine is not getting fuel. Or maybe it’s getting the wrong fuel.

The tractor may also fail due to spark plug issues or failed electrical components. Here’s how to diagnose the issue;

Begin by checking whether the fuel tank has enough juice. If not, replenish the tank. If the problem persists, check the air filter and replace it if it’s clogged.

Finally, inspect the tank for leaks and repair it appropriately.

A bad spark plug is the most common cause of ignition system failure. Is the spark plug dirty? Is it broken? Clean it and replace it if broken.

Also, check for a dirty fuel filter and replace it accordingly.

The XT1 Cub Cadet may also fail due to a dirty carburetor, blocked fuel lines, a bad safety switch, or a bad ignition switch. You may need to call a professional mechanic to troubleshoot some of these issues.

Hard-starting includes circumstances when the tractor starts and stops almost immediately or when the engine roars but the tractor doesn’t respond.

These issues can arise from various factors as follows;

1. The fuel pipes are dirty or clogged

If the fuel lines are dirty or clogged, the engine struggles to generate enough power. So, it may roar for a few seconds, then die down.

Clean the fuel system and replace cracked or broken pipes. Then test the machine to see if the problem is gone. If not, diagnose the carburetor.

Contaminated fuel can also cause hard starting. Test the fuel to determine if it’s the right grade. Also, is the fuel fresh? If not, replace it.

Two other issues that can cause hard starts in the Cub Cadet XT1 are a malfunctioned spark plug and a defective cooling system. Clean both parts thoroughly or repair and replace broken ones.

Overheating is a common problem on the Cub Cadet XT1 LT50 FAB. Fortunately, most overheating causes are easy to fix without professional intervention or special tools.

1. The tractor is overloaded

The mower’s engine will overheat under heavy load. Avoid overloading or overworking the tractor to prevent overheating issues.

2. The cooling system is compromised

The cooling system easily handles normal overheating issues in an efficiently functioning automotive. So, perhaps your tractor overheats because the radiator is compromised.

Are you using the right engine oil? Is it the right oil grade? If not, change the oil.

Additionally, ensure a sufficient oil level and viscosity. The issue should be gone by now. If not, consult a professional.

Here’s what to do;

1. The engine runs but misses

Alternatively, the ignition air gap is incorrect. Adjust the gap to the correct level.

A backfiring Kohler engine is often due to a bad spark plug. Clean the plug or change it. Also, diagnose the carburetor and inspect the inlet and outlet valves.

If the problem persists, test and adjust the valve clearance.

A stalling Cub Cadet XT1 engine is often due to stale gasoline. Change the fuel and see if the problem is gone.

Alternatively, the engine oil is bad and must be replaced. Low engine speed, damaged pistons, and a cylinder bore can also cause knocks.

4. The engine gets too much fuel

The engine will get too much gas if the choke doesn’t open well or the carburetor has malfunctioned. So, adjust the throttle cable and the carburetor to fix the issue.

Diagnosing a dysfunctional mower deck is challenging because the issue can originate anywhere.

Nevertheless, the following are the most common causes of poor deck mower performance and how to fix them;

An out-of-level mower deck is the main cause of uneven grass cuts. Secondly, check if the mower has sufficient tire pressure and correct wheel height and fix the issues.

Finally, ensure the blades are sufficiently sharp, and the mower runs at the recommended speed.

The most common reason an XT1 mower blade scalps grass during mowing is wrong height adjustment. So, check and adjust the height. Don’t forget to adjust the mower rollers too.

Often, if the mower runs but doesn’t cut grass, the discharge area is clogged and needs cleaning. Alternatively, the blade is defective.

This is often a complex problem because it leaves you confused about the origin of the problem. The following are a few troubleshooting tips to consider;

The XT1 mower will not move if the drive belt is damaged, worn, or fallen out of place. So, replace the deck belt and ensure it’s securely attached around the pulleys.

2. The drive release lever/bypass rod is in the wrong position

The release lever must be correctly positioned on zero-turn, and the bypass rod disengaged. Otherwise, the mower will not move.

Bard or old hydraulic oil can also cause a static mower. For instance, a poorly lubricated hydraulic system often seems weak and hard to operate.

So, change the hydraulic oil or top up the oil level appropriately.

Three other issues that may cause a static mower are air bubbles in the hydraulic system, a missing idler arm spring, and a bad tensioner pulley.

Changing the hydraulic fluid and bleeding the system solves the first problem. Meanwhile, consider replacements for the latter two issues.

It also allows the mower to tackle heavy projects and wet grass without slowing down.

Unfortunately, many users report issues with the IntelliPower feature. Below are solutions to the most common complaints.

Unfortunately, IntelliPower doesn’t work effectively when the oil level is low. So, replenish the engine oil and see if the problem disappears.

While at it, fix the root cause of low oil levels, such as leaks and dirty air filters.

IntelliPower may also become erroneous if the mower deck has issues. For instance, an unbalanced deck level confuses the IntelliPower feature.

Similarly, dull mower blades can cause a few monitoring issues. Of course, a static mower deck may also leave the IntelliPower feature idle.

Then diagnose the self-propulsion system. If the problem persists, it’s time to engage the Cub Cadet customer service desk.

Of course, all tractors vibrate lightly. However, excessive vibration is often a sign of underlying issues. The following are common problems to look out for;

Engine bolts secure the engine firmly to the base, preventing movement and accompanying noises.

So, missing bots can cause loud vibrations. Fortunately, fixing back the bolts instantly solves the problem.

2. The clutch is bad

When failed bearings fall out of the clutch, it can also cause vibrations. Engagement clutch bushings and linkages can also fail and fall off, causing movements and vibrations.

Replace the failing clutch to resolve the problem.

Unbalanced, damaged, or blunt mower blades can cause vibrations during mowing.

Foreign particles wrapped in the blade shaft, worn spindle housing bearings, and a bad deck belt or pulley can also cause excessive mower vibrations. Fix them promptly, and the issue will be gone.

Here’s how to fix the most common issues;

The first thing you want to check when you have a weak transmission is the condition of the transmission oil.

Is it enough? Is it clean? Is it fresh? Fix all three issues promptly. Additionally, make sure you’re using the right hydraulic transmission oil.

A damaged or defective drive belt can cause inefficient transmission pump function. To fix the issue, inspect the belt for cracks or general wear and repair or replace it appropriately.

The following is a summary of the various Cub Cadet XT1 LT50 problems and recommended fixes;

Of course, we’re unimpressed by the long list of potential problems, especially the preventable engine issues.

Surely, the manufacturer can do something about the constant issues. The hydrostatic transmission issues are another major worry.

Suppose you’re unimpressed by the XT1 LT50. The following are excellent alternatives within the same price range;

Cub Cadet XT1 LT50 is a great mid-range mower at a great price. It packs enough power to handle regular tasks and comes with all the bells and whistles of a modern mower tractor.

Unfortunately, it isn’t without issues. So, be prepared for regular maintenance and periodic repairs.