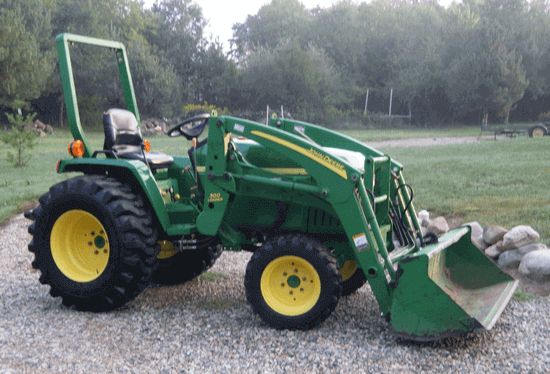 As with every machinery with its downsides, the John Deere 790 is no exception. It is a compact utility tractor operating on a three-cylinder diesel engine.

As a smaller tractor, it works for all kinds of farming activities and other tasks, like using it to push snow slightly forward around the house or brush hogging.

However, users over the years have complained about facing specific issues while using it. Have you used one before, or do you own one?

Well, this article talks about some John Deere 790 problems as well as solutions to these problems.

Some problems could come up with using this tractor, but the good news is that there are also quick fixes.

Now let us talk about nine issues that you might be faced with if you decide to make use of a 790.

1. The Unit not Starting

One of the common problems with this tractor is that it might not kickstart at the first turn of its ignition key; that is, the engine might not start.

This is one discussion starter about this tractor, especially when the engine shuts down.

This could happen for a lot of reasons. Here are some of them

There could also be some issues with the electrical parts of a John Deere 790. The good side is that they are primarily minor faults but could affect the proper functioning of the tractor if not rectified.

A switch or electrical part could be due for a change. However, you can prevent this if the tractor is taken for monthly servicing.

These regular checks will ensure any error with the electrical parts is corrected, and parts that need replacement are fixed.

It will also save you from any future faults later which could happen unexpectedly, such as the engine knocking.

The front loader, also known as the wheel loader, is the part of the tractor operated to pick, excavate, load, and move materials. This is also the part most users have issues with.

The tractor’s loader requires certain adjustments to function properly because it has an under-engineered front-end drive on the wheels.

So if this front-end loader is not properly fixed or installed, it might not work well. To get it to proper functioning, you need to do the following, especially if you are reattaching a new one:

This is another problem with this tractor. Several parts should be checked if adequate fuel is not flowing to power your tractor.

It could be a result of one of them being faulty or in need of replacement. You want to check the fuel tank, electric fuel pump, fuel filter, and injector.

Low oil viscosity could also result in the fuel being burned faster than it should; hence you want to also check for this.

This is one of the leading causes of engine overheating, a bigger problem.

A faulty drive belt could result in the tractor not moving forward or smelling like it was heating up. In this case, the belt needs replacement.

It is advised to follow a guide or manual to do this so as not to tamper with other parts around the drive belt.

The spark plug wire, deck, and battery are usually disconnected for the old ground drive belt to be removed before a new one is put in as a replacement.

The John Deere could also begin to stall at any moment for no reason at all. This is one of the most common problems of the unit not starting.

The common cause for this is usually a result of a clogged valve or faulty fuel filters.

These valves and filters could require thorough cleaning or maintenance, which is why the tractor system is slow.

You want to do an in-depth check of the entire fuel system so this does not result in further problems.

After use over some time, the fittings of the 790 are prone to leaks. It could cause a delay in your work as these fittings to take a minute to get fixed.

This is why general maintenance is advised as often as possible, mainly when your tractor has been used for years.

If inspection is done when it should be, those leaks will be fixed and even prevented before they cause further problems.

If the tractor system begins to underperform, it is a cause for alarm. Underperformance happens when John Deere finds it very difficult to do the work it used to do effortlessly before.

Insufficient hydraulic fluid is the likely cause of this problem. If it is not topped up or replaced when it should be, it could go below the level it should be for the tractor’s proper operation.

So checking the hydraulic fluid reservoir should be done as often as possible if you want the John Deere to work at its optimum.

This could also happen when it is due for servicing or the system is generally aging.

9. Disrupted Flow of Oil to the Engine

If the engine does not get an adequate flow of oil, it could affect the proper functioning of the tractor. This means the engine would not start, and your John Deere would not move.

This could happen for several reasons, some of which are:

All the above problems could be rectified with simple clean-ups and checks, but when specific tools are used in testing, you might need to take them to where you bought the tractor.

How to Fix John Deere 790 Problems

There are several solutions to the problems described above. They are also specific fixes to the issues with the 790.

Overall, good upkeep habits, regular maintenance, and servicing of parts of the tractor would go a long way in preventing some of these problems.

Some of these solutions are:

With all these mentioned earlier, is this tractor a good buy? John Deere is known for making excellent tractors.

Most people go for the 790 because they need a compact tractor on a budget to do the work in their small space.

Also, it is reportedly very economical on diesel, and in the absence of all the problems described above, it runs smoothly.

So, you can go for this tractor if it meets the requirements you want. After all, it is a super little machine.

John Deere 790 is a compact utility tractor that efficiently carries out its work. It is fuel economical with a hydraulic system that ensures regular oil flow to all its parts. Compared with other tractors, it does not make much sound, making it preferred for use in small residential areas.

John Deere 790 has several disadvantages. It is weak compared to other tractors, which makes it not as durable. It could also have starting issues when used initially. The terminal connectors of its battery are inferior, which could lead to the parts disconnecting quickly. Regular maintenance and servicing must be done to keep it working at the optimum level.

What category is a John Deere 790?

The John Deere 790 model belongs to the category one three-point hitch with a power take-off of 24 horsepower. It has a three-cylinder diesel engine producing 30horsepower. It could also come in 2WD or 4WD, where it comes in either manual or power steering.

So now you know the problems typical with this tractor; you are not in the dark before you purchase or use one.

Some parts also need to be checked and regularly maintained, such as the drive belt, air, fuel filters, front-end loader, and cylinder.

All you have to do is carry out general servicing and regular checks so you can address any of these problems on time.

The John Deere 790 is a good tractor; when put to good use, you will get your money’s worth.