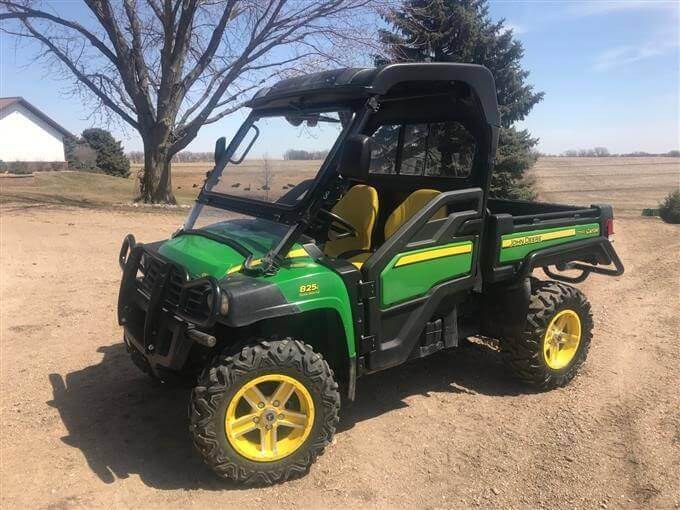 The JD Gator 825i, introduced into the market in 2011, is a reliable crossover utility vehicle from John Deere.

In addition to the traditional John Deere Gator features, this model offers enhanced durability and versatility. You could use this UTV either on your property or for off-road rides.

However, while many consider it a high-performing option, some users reported issues with the fuel pump, clutch, and 4WD, among other components.

This post focuses on various John Deere Gator 825i problems and their troubleshooting options. Read on to learn more;

While you could switch off the machine’s engine to shift without breaking a sweat, the clutch might still fail to release.

You are more likely to encounter this issue due to a high idle speed or if the clutch needs lubrication.

Similarly, lubricating the clutch with a wet lube such as WD40 could lay a foundation for future clutch problems in your UTV. Also, some users have alleged this issue to be a faulty clutch system.

If you’re experiencing similar issues with your Gator 825i, check and adjust the idle speed to the recommended specification.

If this doesn’t work, inspect the clutch and apply a Comet GP730A lube to stop it from sticking.

After spraying the lubricant, wipe off the residue using a rag. However, if your clutch is defective, your best option is to replace it.

Another concern with this John Deere model is its transmission, where it becomes difficult to cycle through gears.

According to some users, you could shift gears normally when the engine isn’t running.

However, shifting the gear from forward position to reverse becomes increasingly difficult once you start the engine.

Similarly, you could encounter a scenario where the gears shift forward and reverse normally but fail to disengage. In this case, you’ll have to switch off the engine to get out of gear.

Unfortunately, there isn’t much you can do when experiencing issues with your vehicle’s transmission. First, try servicing your clutch immediately using the correct lube.

During this step, be weary to avoid getting the belt or sheaves oily. If this doesn’t work, your best bet is to replace the clutch entirely.

Another prevalent issue you’re likely to experience with your John Gator 825i is failure or difficulty to engage the 4WD.

Although users claimed that the 4WD often responds actively without issues, it would sometimes fail to engage due to several factors.

Firstly, you’re set to encounter challenges engaging the 4WD if you’ve been driving for a long time while it’s snowing.

Secondly, the issue could result from jammed tires or if the back wheels don’t spin properly. Similarly, this issue could be due to loose connections or a dirty fuse socket.

As soon as you encounter this issue, inspect the rear wheels. Typically, the rear tyres should spin faster than the front ones.

If they aren’t, you’ll want to maintain or replace them entirely. Here are more troubleshooting options.

Most JD Gator 825i owners often complain about the engine starting hard or running rough.

Since the engine requires ether to run while pumping the gas, it will operate fine, especially if you opt for a cold start.

However, you’re likely to encounter puttering or the engine running rough if you shift gears when you aren’t on the gas.

To twist the knife, the vehicle sometimes reclines roughly or poorly and sputters when you nudge the gas pedal.

A major cause behind this malfunction is flawed injectors and blocked fuel pumps. Similarly, your vehicle’s engine could run rough when the fuel pressure is erratic.

All these defects arise when there is a wiring problem, including torn and severed wires. Additionally, this may be due to a broken or dirty air filter.

Check out the fuel pump and injectors as well as the wiring. Replace any faulty components and torn or broken wires.

Lastly, inspect your air filter component for any issues. For instance, a broken or dirty air filter could result in the engine running rough.

While the tractor’s fuel pump generally works optimally, it becomes noisy under high pressure and may fail to start.

Sporting fuel pump issues is easy, characterized by a loud noise and the engine struggling to operate.

Typically, whenever you turn the key, the vehicle will clock 12V at the connection before it stops working. Additionally, you’ll also hear the relay switch turning off.

We can allege this issue as a defective fuel pump, regulator, or worn or slackened wire harness. Similarly, this issue could be due to a damaged inline filter.

If you’re facing such issues, inspect your fuel regulator, pump, wiring, and filter. Replacing or repairing faulty components could solve the issue.

If neither of the above troubleshooting options work, consult your local John Deere dealer or a qualified servicing professional.

The John Deere Gator 825i is prone to several electrical issues. These issues include the battery not charging, the release indicator staying on when the engine is running, or the starter turning slowly.

Sometimes, the vehicle’s battery might drain completely, and it does no good to replace it. All these suggest possible electrical issues with your UTV.

They may occur due to cracks around the exhaust pipe’s nozzle or worn wires in the engine’s electrical circuit.

Examine the engine oil level- Ensure that the vehicle rests on a flat surface and inspect the oil level when the engine cools down.

Unfortunately, grime and dirt can infiltrate the engine when you are inspecting the oil level. As such, you’ll want to tidy the surrounding area before taking out or loosening the dipstick.

Check the oil level on the dipstick and deplete or increase the fuel as required. Next, replace the oil fill cap, taking caution not to introduce debris.

Finally, fill the electrolyte halfway between the filter neck and the plate’s lid. Remove and replace the battery- For this step, lift the hood and detach the negative (-) cable from the battery.

Afterward, try re-installing the battery by attaching the +ve terminal before the -ve terminal. Finally, tighten the bolts loosely and lower the hood.

Alternatively, here are some of the best battery chargers you can use to revitalize and maintain your mower’s battery.

Your utility terrain vehicle failing to start when warming up is a common issue with Gator 835M model and JD Gator 825i.

After clocking the 200 operating hours mark, you may experience difficulties starting your vehicle.

Like many other defects, this vexing issue features several troubleshooting options. Here are some fixes to try before visiting a mechanic.

Is The John Deere Gator 825i Worth It?

Overall, the JD Gator 825i is durable and built to last. You can trail ride with it all day long without experiencing major setbacks.

However, brace for possible problems, including the ones mentioned in this post.

The John Deere Gator 825i is a great vehicle for outdoor enthusiasts. It’s also suitable for off-road trips with friends and family.

While it comes with its fair share of problems, it should in no way deter you from acquiring this UTV.