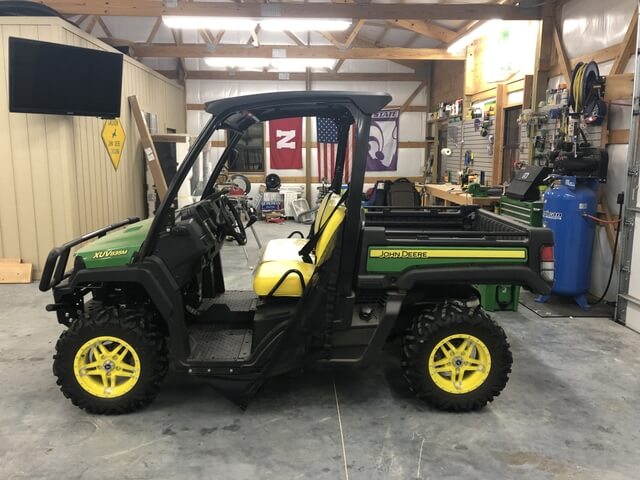 Daily jobs are tough enough. The last thing you want to deal with are John Deere Gator 835M problems. Luckily, this utility vehicle is stable. It works even on rugged terrain.

Despite the rock-solid reliability of the company and this model, you should expect some problems, especially if your John Deere Gator 835M will operate under harsh conditions.

We’re not prophets of doom, but we think you’ll encounter an issue or two along the way, but we got you covered.

It’s common for users of the newer Gator 835m to complain about starting issues, “It just clicks when I turn the key in the ignition switch—it doesn’t start”.

That can be caused by a dead battery, loose connection, bad ground wire, poor connection to the battery, or a faulty starter. This is also a problem with the 7 John Deere Gator 825i.

You can diagnose and fix John Deere Gator starter problems on your own but it’s always a better idea to have a mechanic have a look at your John Deere Gator UTV if you have little to no experience dealing with such.

The ground wire links a vehicle’s electrical system by connecting the battery’s negative terminal to the vehicle’s chassis.

It provides the electrical return path that we need for the starter motor. It completes the circuit, ensuring that the current flows.

If the engine starter motor is not responding, check for a faulty ground wire that connects the electrical system to the battery. The electrical connections could be responsible for the issue.

It’s powerful for its size but John Deere buyers complain about the starter not responding or the engine not running because of a starter motor issue.

It depends on what the problem is—if it’s not the starter motor. Some of the fixes that you could try include checking the ground wires if you have a starting problem, changing the starter if it’s faulty or just bypassing the key switch.

If the engine won’t start, try checking your battery or change the fuse.

This is a strange problem but it happens. John Deere Gator 835M are known to have window and door problems.

From doors not closing properly to windows making creaking sounds, and the gaps in the hinges allowing air—which doesn’t sound good for a cold morning, your John Deere dealer will not be surprised to see your face.

You can always get this fixed on an extended warranty if you don’t take care of it immediately.

Like many users, you could use rubber seal cream if it’s not that bad. However, if it’s a big problem, have it fixed by a professional, especially if doors don’t close as tightly as they should.

Overheating is one of the most common John Deere Gator 835M problems, especially during the hot months. It’s even worse if you need to use your utility vehicles for long hours.

There are a couple of causes for overheating Deere Gator 835M. One is a clogged fuel filter, which prevents fuel from reaching the engine, which then causes the fuel pump’s pressure to increase, resulting in overheating.

Fill up the tank and clean your air filters.

Another possible cause is the wrong oil levels. It shouldn’t be too full or too little.

Also, clogged air filters will prevent air from getting into the combustion chamber, resulting in overheating.

First, if this is a recurring issue with your Deere Gator 835M, you need to fix it as soon as possible because high temperatures ruin some components in the engine.

And that’s not the worst that can happen, your engine can knock or detonate.

Possible solutions for excessive heat include cleaning the engine with a soft fiber brush, maintaining the right oil levels, and checking the fuel system to ensure the fuel tank tubes and the fuel filter are not blocked. If the filter is blocked, clean or replace it.

It’s also advisable to let your Gator 835M engine to cool down before an oil change or even adding oil to avoid the overheating issue.

This problem is worse for users who prefer installing a glass windshield on their Gator 835M. It’s not only hard to install a windshield, most users complain glass windshields don’t close properly.

You wouldn’t want to damage your brand new Gator, would you? Give it a professional look by installing the windshield correctly.

You do that by opening the latch and pulling it. The tang then goes over the outer piece. Voila! Your glass windshield will close tightly.

Remember: If you live in a hot climate area or use your John Deere Gator 835M a lot in summer, do install your windshield in the forward position to let air in.

This is one of the most common problems. Gator 835M users report difficulty in lifting the valuable cargo box on the rear end of the vehicle.

They complain about the lift mechanism. Most of them complain it won’t lift if there’s anything on it—sometimes it doesn’t work even if there’s no load.

This lift mechanism problem can arise as a result of different things. From loose electrical connection to the lift system and a faulty motor clutch.

You solve it by fixing or replacing the motor clutch and the seals and ensuring the electrical connection is complete.

Note: Disassembling and reassembling is not an easy task. Going to a professional is a good idea if you’re not up to the challenge.

This problem is not so common, but some John Deere Gator 835M owners complain of axle leaks (leaking seals on the front axle) when they reach a certain speed.

Mostly, the problem of leaking fluids has to do with wrong installation, dry or worn out front axle, or loose bolts. It’s definitely dangerous to drive utility vehicles with leaks.

You need to fix the problem immediately if it’s losing too much transmission fluid because you risk having to replace the transmission—which is not cheap. It can be permanently damaged.

If the cause for the leak is improper installation of the front axle, you can fix the problem of leaking fluids by reinstalling it properly. You can also tighten the bolts and repair the worn out axle seal.

This problem can be avoided by good maintenance and just checking (that is, if your gator is old, because then you can expect it to break).

Otherwise, you’re unlikely to experience this problem if you are keen on maintenance and disposing of your vehicles in good condition rather than hanging onto them—except for sentimental reasons.

Other problems, which are common to this John Deere XUV model of gator vehicles include throttle problems.

The machine only moves when the rpm is around 1700 – 1800rpm compared to others which start at 2000 rpm. Unfortunately, there’s nothing you can do about it other than get used to it.

You should also expect 4WD and clutch problems. When at full idle speeds the clutch at times refuses to open up resulting in shift issues.

Sometimes the 4WD will not engage at all. The reason for this can be overheating, tough terrain, and loose connections.

What engine is in the XUV835M Gator?

The Gator 835M features an 812cc 3-cylinder gasoline engine that’s powered by John Deere Power Tech. The engine has an engine capacity of 54 HP and a high 47 lb-ft of torque.

Who makes the engines on JD Gator?

The engines on John Deere’s Gator model are made by Chery International of China. The engine was tested on small cars before being tried out on UTVs. While the engine has great reviews from on-road users, Gator owners don’t complain either—it works just fine.

Where are John Deere Gator engines made?

They’re made in China by Chery International of China, although the Gator is made in John Deere’s plant in Horicon, Wisconsin.

How much does a John Deere 835m cost?

John Deere Gator 835M, a utility tractor of the middle class, costs between the low retail price of $11,295 to an average retail price of $14,865. You just need to look up the prices under utility vehicles and pick the best price.

What is John Deere’s transmission?

Some John Deere Gator 835M users report difficulty starting engines, windows and windshield issues, front axle issues and all the problems we’ve highlighted in this article. However, that doesn’t take away from the great reviews from users following good experiences despite the hitches and the earlier recall by the company.

How much does a John Deere 835m weigh?

Which is the best John Deere Gator?

The JD Gator is a good buy for people who want a range of features to choose from, to customize their machine to their needs or fashion it to their taste. If you’re looking for a vehicle to help you with cutting grass and mowing the lawn, your best choice for John Deere Gator is the Gator 835M—small, versatile and efficient.

The John Deere Gator 835M is a XUV cross utility vehicle that comes with a cargo box. We think it’s a dynamic, hard-working farm utility vehicle, and farm tool.

You can use it to plough snow, herd livestock, navigate through a rough farm, and more. The G-Series Gator 835 takes otherwise tiring chores off of a farmer’s hand.

However, despite being sturdy and built for a long run, users often highlight these common problems that we’ve just shared.

While these problems don’t drop the standards of this machine, it’s good to know what to expect to prepare for what lies ahead, maintain your Gator 835M, or fix its parts.